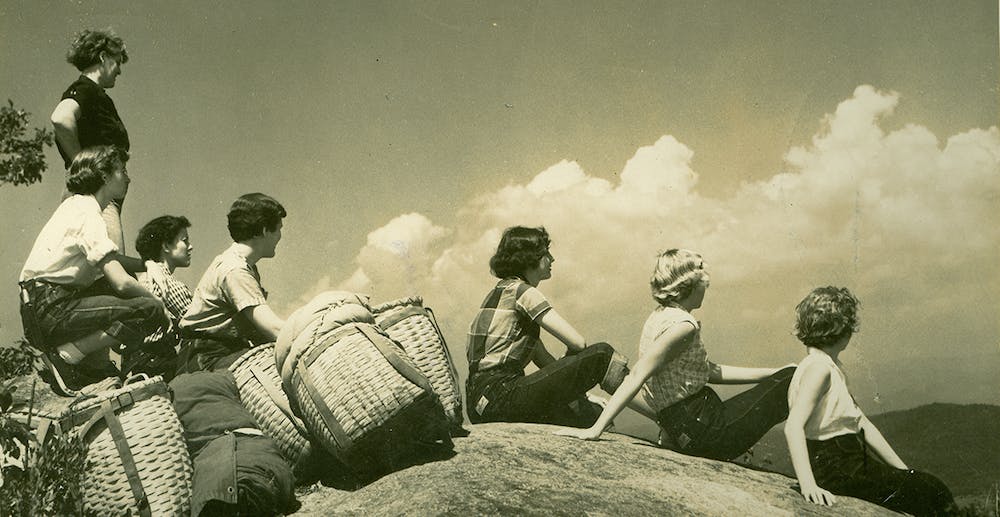 Listed in the National Register of Historic Places

Mary Bell founded Camp Glen Arden in 1951. For many years, the camp was located at Christ School in Arden, NC. In 1972, Glen Arden moved to its current home. The Bell Family operated Glen Arden as a sister camp for Camp Arrowhead for Boys for 45 years. In 1996, the camp was purchased under the leadership of longtime director, Carol “Casey” Thurman. Casey and Liz McIntosh served as the directors until 2016.

In 1919 J.O. Bell built a pavilion off Cabin Creek Road a few miles southwest of his Green River Manufacturing Co. mill in Tuxedo. Using timber cut on the property, workers constructed cabins and other structures that later became a camp recreation hall and gym.

In 1937, Bell’s son, J.O. Bell, Jr., transformed the property into Camp Arrowhead for boys. Like previous builders, he used native materials to erect log structures with board and batten siding and gabled roofs. Cut granite blocks were piled on top of one another to dam a creek for a camp pond. A bridge, built that year of planks with a log railing, still crosses the dam and waterfall that splashes nearby.

In 1951, the younger Bell and his wife Mary founded Camp Glen Arden, a girls summer camp on the campus of Christ School in Arden. In 1972, Glen Arden moved to the Arrowhead property. For 18 years, the rustic camp buildings hosted girls the first five weeks of each summer as Glen Arden and boys the second five weeks as Arrowhead.

That tradition continued until 1990, when Arrowhead moved to a nearby site. The Bell family owned the Glen Arden property until 1996 when Joseph Bell III sold it to the present owners. Casey and Liz McIntosh served as the directors until 2016.

“The buildings look much the same as they did in the early days, giving today’s campers a sense of continuity with their parents and grandparents who spent summers here,” says camp director, Casey Thurman. “The historic designation not only recognizes the site’s history, but assures that future generations will see the rustic buildings as they have long stood…”

Editorial from the Hendersonville Times-News